Below, a representative selection of grassroots comics which have been made into wallposter comics. The samples are from Burundi, Kenya, Lebanon, Mozambique, Somalia, Finland, Pakistan, and India. 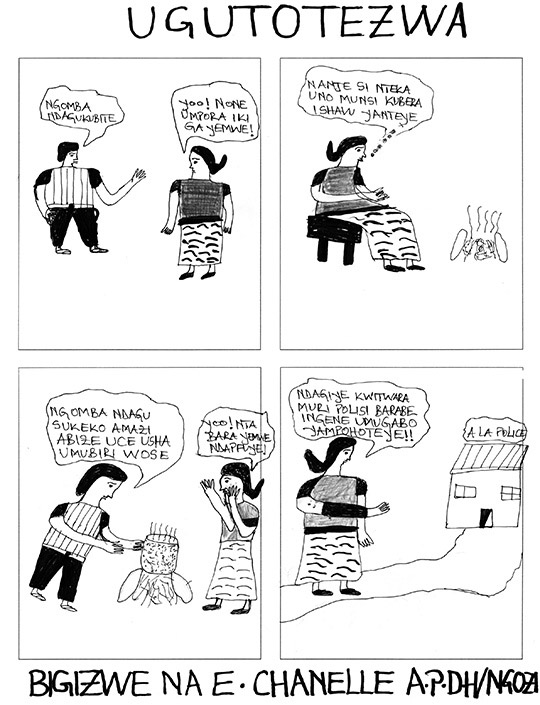 Cooking. A man abuses his wife, who decides not to cook for him, although she has already made a fire. The man throws boiling water on her. After first aid, she reports him to the police. Story and Art by Ms. E. Chanelle of APDH, Ngozi. 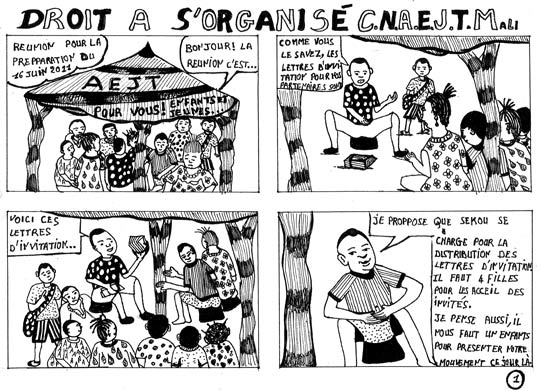 This is the opening page of Isaak Traore's four-page comic about children's rights to organisation and its benefits. The story is about Sekou who had an accident when he was preparing for a village meeting to celebrate the annual Day of the African Child. Because his organisation was well connected to EJT (The Mali branch of the African Movement for Working Children and Youth), in the capital, they could get medical help to Sekou quickly. The story ends with Sekou opening the village meeting. Story and Art by Isaak Traore, EJT, Mali.

The pages of Isaak's comic follow the format of a grassroots comics wallposter: it has four panels on one page. Here, however, the panels are made in wide mode to accommodate printing in a magazine.

Campaigning against FGM in Somaliland 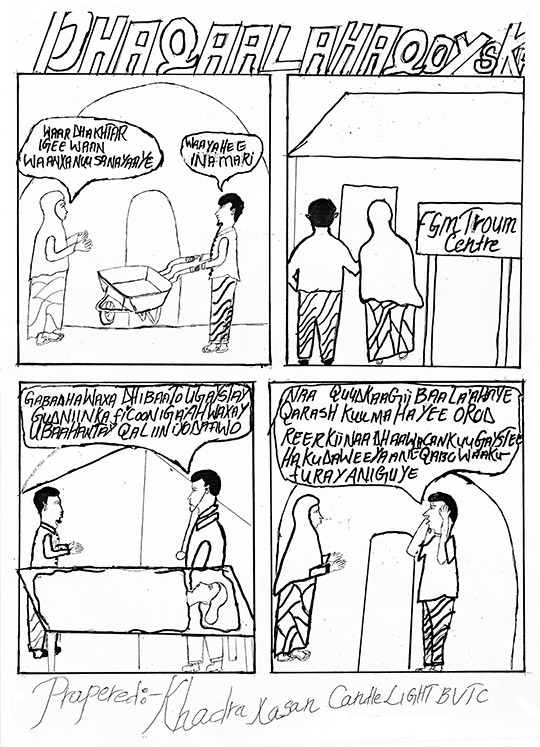 Consequences of Female Genital Mutilation (FGM). A woman tells her husband that she is not feeling well and must see a doctor. At the FGM Trauma Centre the doctor says that she needs an operation and medicines because of problems created by FGM. The man tells her that as he can hardly support her, he cannot find money for medical treatment. He wants to send her back to her family as they are the ones to blame, and he is going to divorce her. Story and Art by Khadra, FGM Campaigning, Burco, Somaliland.

The organisation Candlelight has for some years campaigned against FGM in Somaliland, with support from the International Solidarity Organisation (Finland).

The education of girls, Tanzania 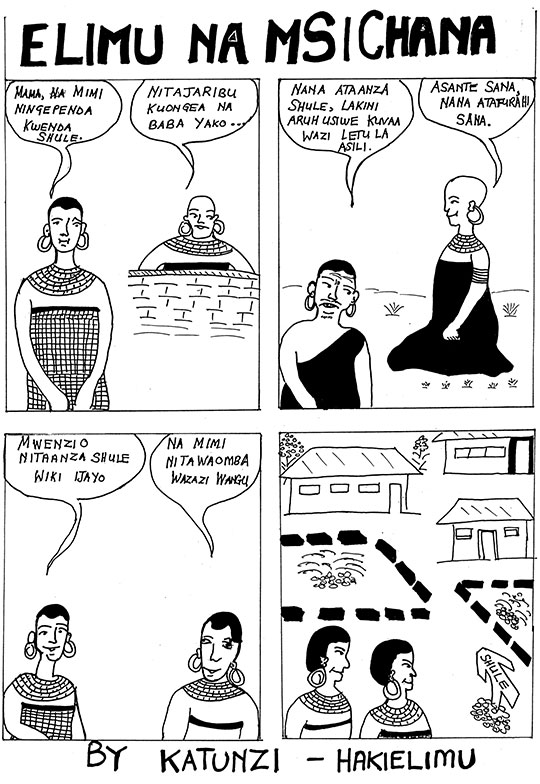 This wallposter comics, with its subtle message, has turned into a classic. It was made in 2003, and has since been published in many places. It has been very useful in training workshops as an excellent example of how to convey an important message.The story is about a Maasai girl, who wishes to go to school. Her mother talks to her father, who in the end supports the idea, but only on the condition that she will not be subjected to a foreign culture in the school. In the last panel the girl is going to school together with a friend. 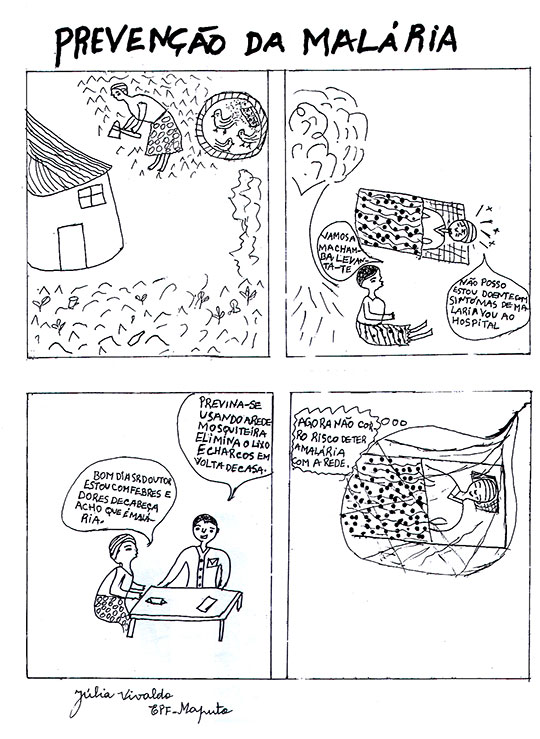 This story explains how to avoid malaria by environmental sanitation and by the use of mosquito nets. Story and Art by Ms. Julia Vivaldo from Escola de Professores do Futuro (EPF), a teacher training college in Maputo.

Stories on immigration in Finland 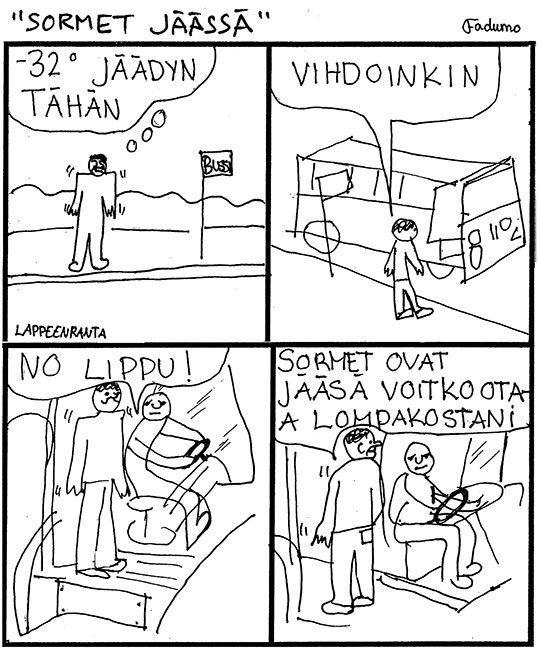 Frozen fingers. A Somali immigrant to Finland waits for the bus in Lappeenranta town. It is very cold. In the bus, the driver asks for the ticket. The immigrant says that his fingers are so frozen that the driver himself must pick the money from his back pocket. The comic was made at the Nuoriso-Kanava (Somali Youth Channel) comics course in 2003. 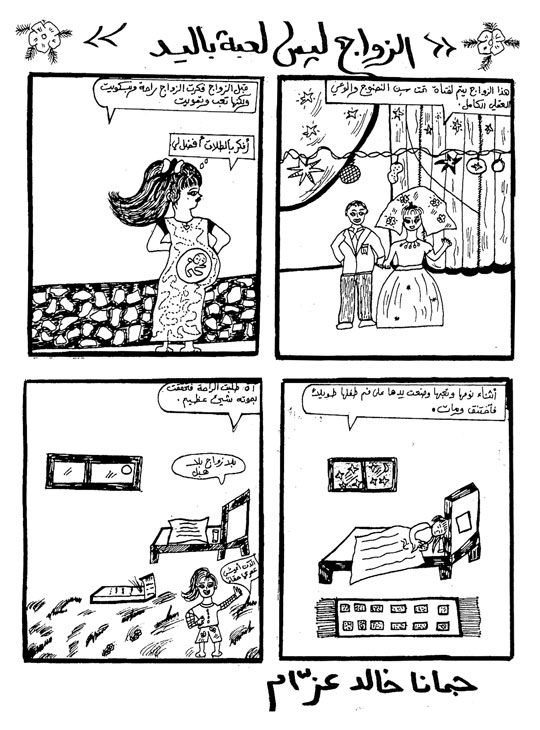 Note: read the comic from right to left. Marriage. A young girl gets married without understanding that the life of a wife is not always easy and fun. Although she is pregnant, she wants to divorce. Later, while asleep, she accidentally suffocates her baby. She says that now she is free and will never marry again. Story and Art by Ms. Jumana Khalid Azzam. 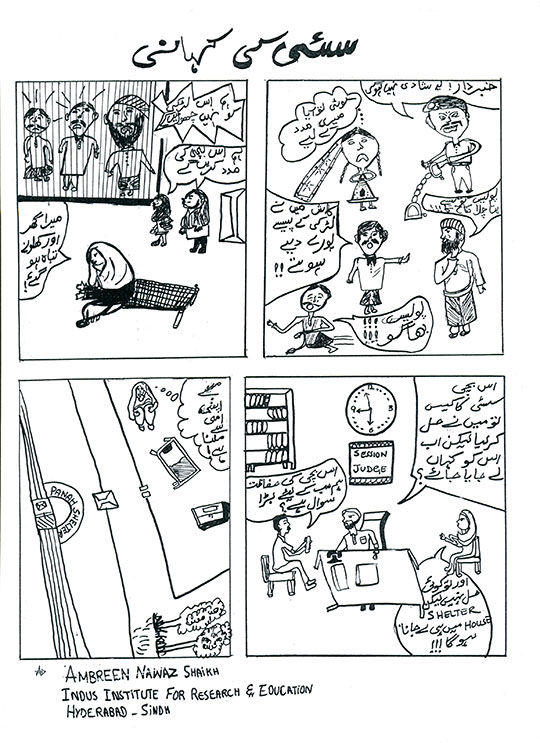 Note: read the comic from right to left. The story is about shelter for battered women. Story and Art by Ms. Ambreen Nawaz Shaikh, from IIRE in Hyderabad 2008, Sindh, Pakistan. 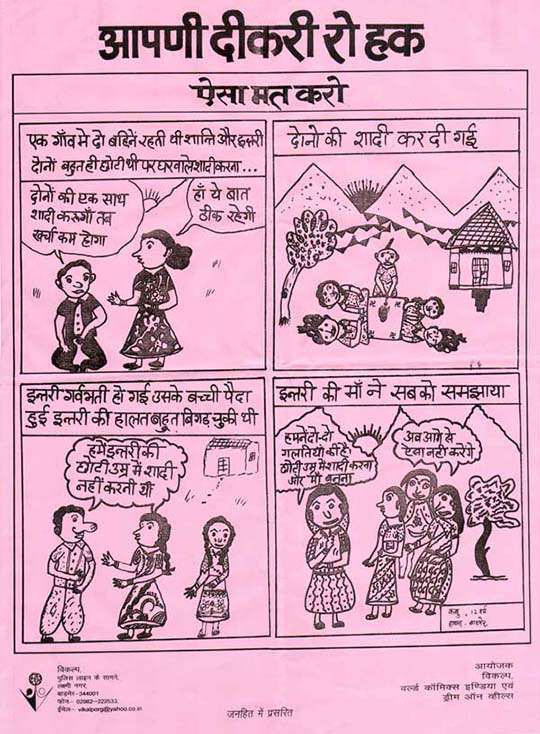 Child marriage and risks involved in early pregnancy. In a village, two young sisters are married off early because their father wants to save money. Afterwards there are many complications. Story and Art by Kabbu, (then 12 years). The campaign printed a set of comics wallposters and they were distributed in more than 100 villages. More information about the campaign which took place in 2006 from World Comics India website. 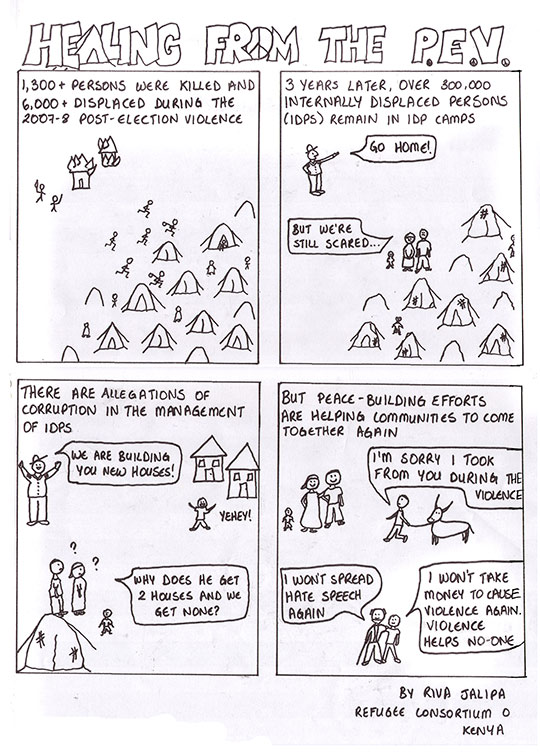 Ms. Riva Jalipa of the Refugee Consortium of Kenya made this comic about the healing process after the violence in connection with the elections in 2008-2009. The comic was done at Youth Alive! Kenya's workshop in Limuru, Kenya in October, 2011.